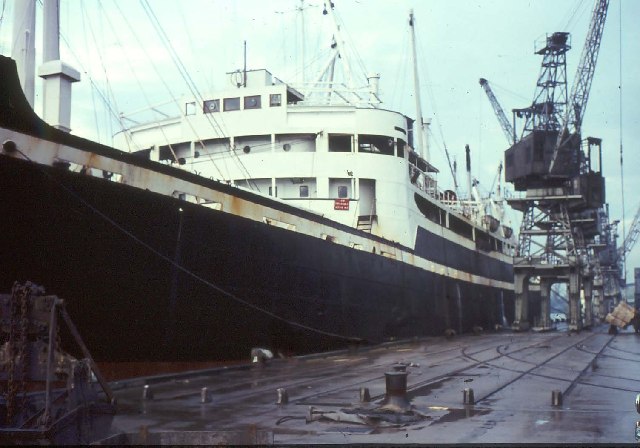 Unloading jute at Dundee in the 1960s © Copyright Val Vannet and licensed for reuse under this Creative Commons Licence.

We left Tom describing some of the dangerous and dirty cargoes, sulphur, cement, wood and scrap metal. He goes on to list a whole range of cargoes that passed through Leith including grain, Carlsberg beer from Denmark, Hillman Imps, Volkswagen cars,  apples from New Zealand and Australia and for export, the inevitable large quantities of whisky and also wire from United Wire. He names some of the regular ships – the Marwick Head and Farwick Head which came in for cement, the Gullfoss which did a journey from Iceland to Copenhagen and back via Leith, so would stop on the way out and back with passengers. The Uganda left from Leith Docks to take excited school children on cruises. The first ship Tom worked on was the Rutland, on a Sunday, when they were finding it hard to get dockers to work for the day. Of course, the dockers got to know the regular boats’ seamen and built up good friendship, and the camaraderie between dockers was strong with more experienced workers looking out for new lads as they learned where to stand and how to go about loading and unloading the different cargoes safely. Tom recalls that there were three fatalities during his time at the docks and also tells of his own accident when he fell off a motor when loading pulp and spent two or three weeks in hospital in consequence. As he

says, “Ye had tae have your wits about ye a lot of the time”. 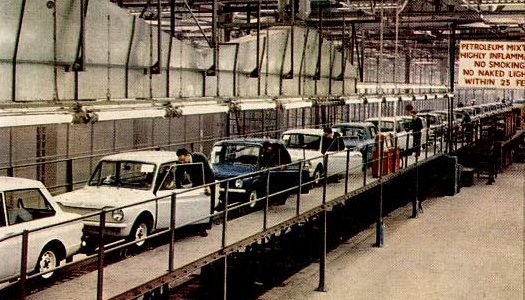 He recalls that he biggest company offering work on the docks was Saddlers, the second largest were Young & Leslie and next were Furness, Withy and Coast Lines and North of Scotland were large too but tended to employ their own men on weekly basis. He explains about sworn metters and sworn checker and weighers who had taken exams and sworn in court they would carry out their work “correct and above board”. Through their work the shipping companies would always know exactly how much cargo was on their ship at any given time.

He describes how loyalty to a foreman would pay off as long as you were prepared to take on the dirt jobs as well as the more favoured ones you would be rewarded for your loyalty with regular work. Although the foremen earned only a little more than the other men, they held the power to make the difference between “starvin’ or eatin’” so were treated with respect , although Tom clearly never went as far as the “joug fillers” (see my last post). Joug filler was used as a term of abuse, and favouritism and difficulties getting would lead to resentments, arguments and conflict. He recalls one man, Henry Clarke who was a communist, and quite open about it so he was chairman of the union branch and they called him Stalin because of his being a “right Red” and hints that but for his political leanings, Henry might have become a foreman. Foremen were not in the union, and by contrast the dockers had to be. Tom tells of one man who let his dues to the Transport and General Workers’ Union lapse, was warned that he needed to pay up or he would lose his job, didn’t and that was exactly what happened. Leith dockers had their own branch of the TGWU, the 7/45 Branch which met monthly in Leith Assembly Rooms, and Tom’s father dragged his fledgling docker son along to every meeting so he could “ken what’s goin’ on in the docks” and instilled in him the importance of attending. He says that the only full meetings he attended were in 1989 when the dockers were being made redundant.

Getting cleaned up after work was a struggle even although his family were lucky enough to more into a house with a bathroom when he married. Most workers did not have this luxury and would use Victoria Baths at the back of Dr Bell’s School – via the pub for a drink of course. The most popular bars were the ones closest to the docks – Tower Bar, Muir’s Pub, Tam’s Bar, The Corn Exchange Bar, The Man at the Wheel, Strathies, The Steamboat Tavern, Vine Bar, The Portland Bar and the Annfield – he has a good memory for the pubs the dockers used to go to be with their workmates!

Like Eddie, Tommy, Bobby, George, Jock and Tom Hart he emphasises the need to be at work promptly for 7.45am if you wanted to get work. He tells how men would hang back if the only foreman left had unpopular work and the men knew better work was coming in later on and the system of the National Dock Labour Board stamping the books of those who did not work. The stamps were nicknamed duck eggs because of their colour and shape and those avoiding the hard jobs had to be careful because 6 duck eggs could result in the port manager stopping their pay. Those who could not get work in the hard times used to go to local coffee shops including Shaws and gamble away what little money they had until the National Dock Labour Board intervened and told Shaws not to allow gambling during the day. Work was from 8-12 and 1-5 after an hour for lunch. If the ship was docked far away such as at the far side of Imperial Dock the foreman would knock the men off 15 minutes early to give them time to get to the dock gate. In his later years of working the docks, the men would be driven round in a covered truck.

The acronym for their employment terms was RAT – Report (for work in the morning) – Accept (the work that was on offer) – Travel (to any port where you were required). When other ports such Glasgow, Bo’ness, Grangemouth, Kirkcaldy, Methil, Burntisland, Dundee were short of dockers they would ask a day in advance and men could put their books in to be selected. They had to be ready to get on the bus which would take them across to the other port for the day at 7am. Tom did this about thirty days in a year. He was not personally involved, but remembers that Plymouth once had lots of potatoes coming in and volunteers went there to work for about a month. In the same way, dockers would come from the other ports when Leith was busy. In the latter days there were proper meal allowances but in the early days Tom took his own sandwiches or scouted about to find somewhere to get his lunch when he was working away from home.

Tom worked regularly for Willie Aldershaw, one of the Saddlers gaffers as he would take men on for a whole day and would employ the same regular six whenever he could. When Willie did not have work, Tom would often work for John Martin. So he came to know those he worked with regularly quite well, but points out that you could never know the vast number of dockers all personally.

In 1968 Tom worked as a training instructor at the dock workers training school at Grangemouth, travelling back and forth by train every day for a year. There was a need for people to instruct new dockers owing to the changing labour situation at the docks which I mentioned in another post. He enjoyed the experience of sharing his knowledge and experiences but felt a year was plenty.

Tom welcomed the restructuring of the system in 1969-70 to jobs being allocated and workers not having to struggle in the crowd to get their books taken. He reckons it became a much fairer system with everyone getting a fair share of the good and bad work. Then when the dockers were cut back, Tom received his £35,000 redundancy pay. He reckons that every man who was made redundant at the time “would’ve refused the £35,000 and stayed in the docks workin’”.

At the age of 52, Tom was not ready to retire, so took any work he could find, as a part time van driver, then as a leisure attendant (for which his lifesaving certificate and having been a local and national swimming champion came in handy!) where he was still working at the time of the interviews on which the book is based, enjoying meeting and working with a whole range of people.

Like his fellow workers reviewed earlier in this blog, Tom has no regrets about working on the docks and says it’s the best job anybody could have had. His only regret being that his son did not get to work the docks. His name was at the top of the list to be taken on when the redundancies happened, and the Forth Ports Authority began their policy of employing people from outside. So Tom was never able to teach his skills to his son and work alongside him as he had done with his own father. However, his overwhelming memories are positive and he tells that “There’s no a day passes that ah never think about the docks. Ah’d love tae be doon there. The comradeship, everything was great. The fun that ye had at your work… it wis a great job.”

There are other posts reviewing this book at:

Voices of Leith Dockers – Part One